Home » Scuba Diving News » WHERE TO DIVE WITH MANTA RAYS

WHERE TO DIVE WITH MANTA RAYS 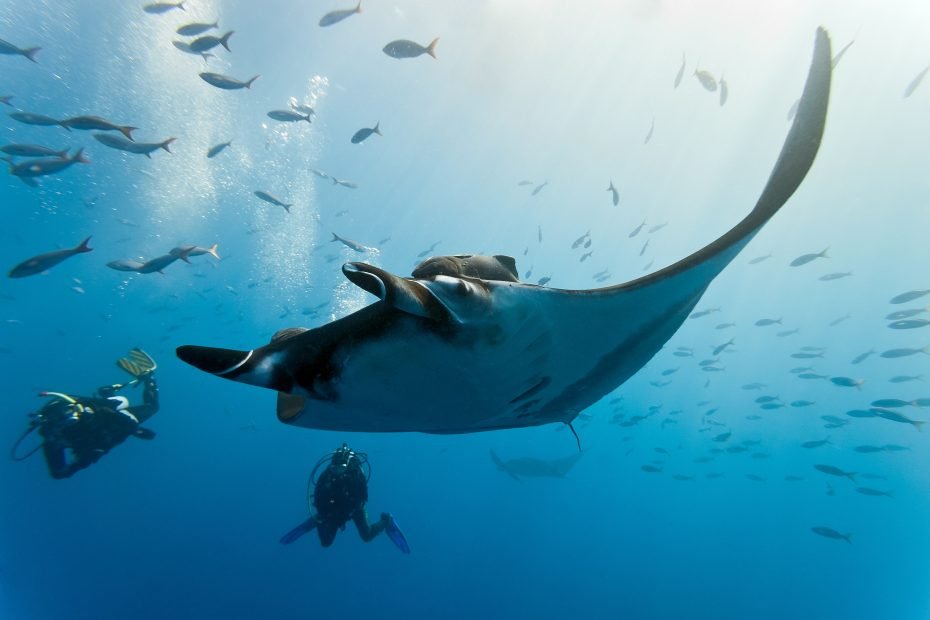 Another bucket list dive right at our door step. North Stradbroke Island is home to Manta Bommie, a dive site rated as a top 10 dive in Australia. The Bommie is a cleaning station and the Manta Rays migrate every year between November and May in large numbers. Manta Bommie is suitable for all experience levels. Check out our dive site library for more information around scuba diving sites and Manta Bommie.

Lady Elliot Island, a small coral cay located on the southern tip of Australia’s famous Great Barrier Reef has been ranked by a number of diving institutions as one of the top 5 locations to dive with manta rays in the world. During the winter months, reef mantas (manta alfredi) aggregate in large numbers, taking solace within the nutrient rich waters of this marine protected area. Scientists believe that there may be up to 450 individual mantas that call Lady Elliot island home throughout the year. There are many dive operators who function in the waters off the island, whether liveaboards from the mainland, or small eco lodges from the island itself.

The Revillagigedo Archipelago is a phrase that will wet the palate of any and every diver. Off the coast of Baja California this volcanic island group is relatively barren above the surface, yet thriving under the waves. The Socorro islands are famed for divers interactions with Pacific giant manta (manta birostris) that can reach a size up to 7 metres (23 feet). Dive sites such as ‘The Boiler’, ‘The Canyon’ and ‘Roca Partida’ are famed for their likelihood to encounter these marine giants. January and April are the best months to witness the mantas at one of the worlds most premier dive destinations.

Isla de la Plata, has for a long time been overshadowed by its national counterpart, the Galapagos islands, yet recently the discovery of mantas has shone a light on this amazing place. While the visibility off Isla de la Plata can be low at times due to plankton blooms, July and September are recognised as the best time to witness  the mantas that congregate here, many of which  are fully grown mature individuals, perhaps the largest in the world.

From September to January, Manta point, a shallow reef that descends to a maximum of 25 metres off the island of Komodo has been known to be home to over 20 mantas at one specific time during a dive. Due to a myriad of coral and marine species, this is not only a dive for megafauna, and manta point is known around Indonesia as one of the most exciting dives that this island country has to offer. Be warned currents can be strong.

Manta Reef near the Mozambique costal village of Tofo is said to have the largest population of mantas in the world with 500 individuals calculated by the ‘Marine Mega Fauna’. Famed for its mantas, whale sharks and humpbacks, the warm Mozambique current provides nutrient rich waters that draw in the mantas between October and March. Most dive operators encounter the mantas on the reef between 20-30 metres (70 – 100 feet) where the mantas congregate around the cleaning stations, cleaning themselves of parasites.

The Catalina Islands off the pacific coast of Costa Rica, are home to giant oceanic mantas between the months of November and May. While many divers leave shore with the chance to see the giant ray, there is always an opportunity to witness other species such as white-tip reef sharks, cow-nose rays, devil rays, eagle rays, and other pelagic species such as barracuda and jack.