MANTA RAYS – ALL YOU NEED TO KNOW 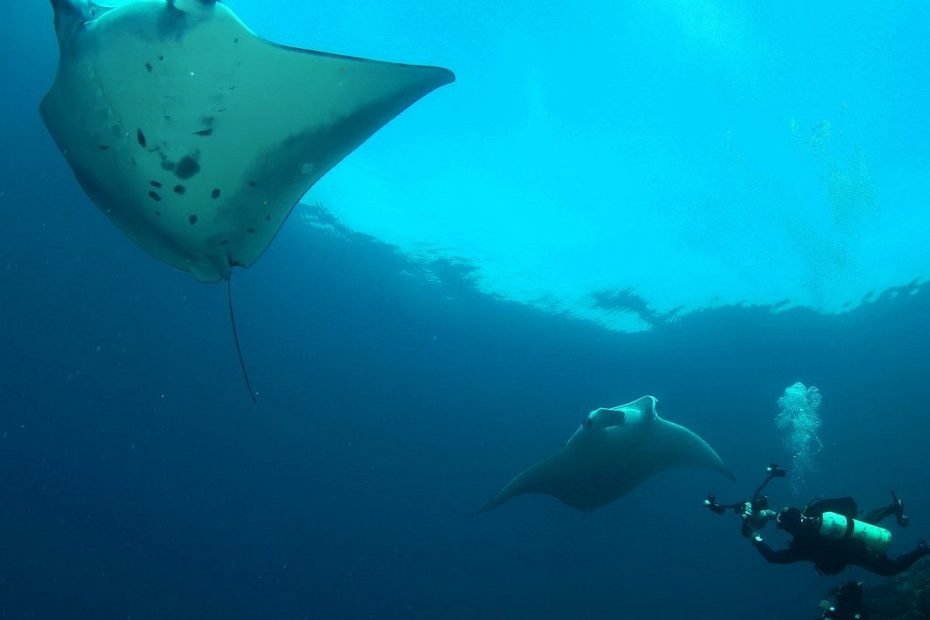 Part of the elasmobranch family, the word ‘Manta’ derives from the Spanish word for cloak, which is precisely what these ocean giants resemble when they soar through the water.

There are eleven species categorised within the Mobulidae family, diversely spread around the world’s oceans, and these fall into two genuses, Mantas and Mobula. There are two species of Manta, the Reef Manta and the Giant Oceanic Manta, the latter famed for its size, growing to a length of 7 metres (23 feet) from wing tip to wing tip and a weight of up to 2 tonnes when fully mature.

Manta rays are planktivores, feeding on tiny microscopic animals that bloom in pelagic and coastal waters, especially off drop-offs and cleaning stations where upwellings occur. Mantas feed almost entirely on zooplankton, having to consume vast quantities to preserve energy.

Mantas have been known to live as long as 100 years, although research has not been rigorously conducted over a large enough span of time to be precise. Although Mantas can live for an exceptionally large amount of time, they are a sought-after commodity by certain food and medicine markets resulting in the mass killing of many of these captivating creatures. Gill nets, long lining and other forms of by-catch are unfortunately responsible for the unintentional killing of many of these pelagic species. Conversely, in areas such as Indonesia and Peru, Mantas are intentionally slaughtered for their gill plates, which are perceived as medically beneficial in the traditional Asian market, and also as a delicacy in South America in meals such as ‘tortilla de raya’. Despite their size mantas are not impervious to natural predation – in fact certain species of shark and dolphin such as the false killer whale are known to predate on Mantas.

Despite these threats to the Mantas’ survival, both species within the genus are classed as vulnerable on the IUCN Red List rather than endangered. Due to conservation efforts and the effect of tourism in many areas in the world, countries where Mantas exist are beginning to realise that the financial benefit of the rays’ survival surpasses the revenue generated by fishing. Areas such as the Maldives and Mexico’s Yucatan Peninsula are perennially witnessing Mantas aggregating in their hundreds.

Research on Mantas began relatively recently, and though many strides have been made in determining specifics about these ocean giants, there is plenty still to learn. For instance, it is known that Mantas, like their Mobula cousins, dive to great depths, often past 1000 metres, yet why? Are they feeding, mating, birthing or simply socialising? It is a question that in time may be discovered, but for now remains a mystery.

While it is known that Mantas become sexually mature between 10-15 years of age, no wild birth has ever been recorded, and in turn scientists presume that their gestation period may be as long as 2-5 years, additionally making Mantas vulnerable, and all the more reason for this magnificent species to be preserved.