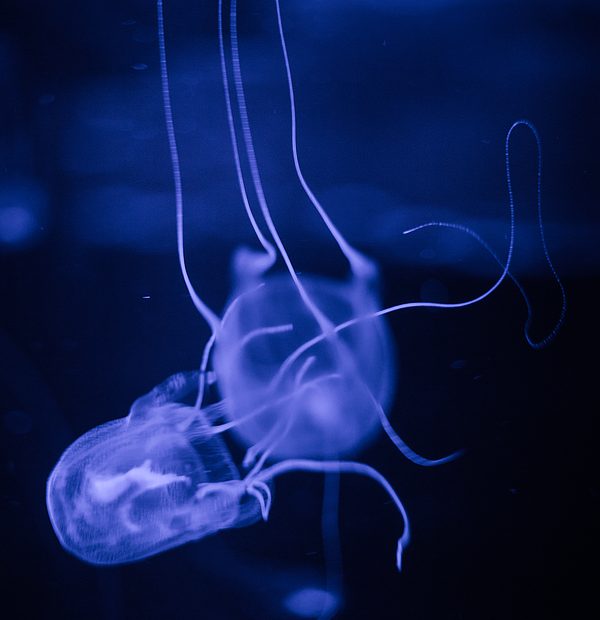 An infamous creature, the box jellyfish, also known as the ‘sea wasp’ is the most venomous jellyfish on the planet. Using its powerful sting to paralyse its prey such as fish and shrimp, the tentacles are deadly enough to kill a human. The toxin of the Box jellyfish targets the nervous system and the heart, therefore most persons affected by the Box Jellyfish die from shock and subsequently drowning. Those whom survive the sting will have livid scars and significant pain for weeks after the tentacles have made contact. Each of the jellyfish’s’ tentacles can be up to 10 feet long. When these tentacles drift in the current they can be difficult to avoid. Each tentacle has up to 5,000 stinging cells, which are activated by a chemical on the skin or scales of the prey. The Box jellyfish habituate primarily costal waters off Northern Australia.

A common misunderstanding, the Portuguese Man O’War is not actually a jellyfish but a siphonophore, a colony of animals that form to work together. Comprised of 4 separate polyps, the swim bladder or air sac expands and deflates to act as a sail to move the colony through the water. Extremely beautiful, do not be lured in to touch, the Portuguese Man O’ War has a powerful and at times fatal sting. The tentacles of the organisms can reach 165 feet in length and although extremely painful are not often fatal. For smaller fish however the Portuguese Man O’ War is a terrifying encounter in the ocean, not only does it sting, it will also use one of the polyps to digest its prey. Found in most marine waters around Australia, the Portuguese Man O’ War or Blue Bottle populations are variant on the wind.

The largest of all the worlds’ jellyfish, the Lions Mane’s tentacles can reach up to 200 feet in length and the entire bell can be as wide as 8 feet. These giants are found in sub Artic waters, however the Australian sub species reach only 1 metre in diameter. The pink, thick strands of tentacles elude to its name, and these tentacles are divided into 8 clusters of up to 150 tentacles in each cluster. Not as deadly as the Box or Portuguese Man O’ War, the Lions Mane is not advised to get too close to. Lions Mane jellyfish are found around the marine waters of Australia.

Named after the people of Northern Australia, the Irukanji jellyfish is not only one of the most deadly of Australia’s jellyfish, it is also one of the smallest. Measuring 2.5 cm, bell and tentacles included, the transparent jellyfish has been responsible for 3 deaths in the recent years. Inhabiting the Northern waters of Australia during the jellyfish bloom between October and May, the Irunjandji is most prevalent around the province of Queensland.