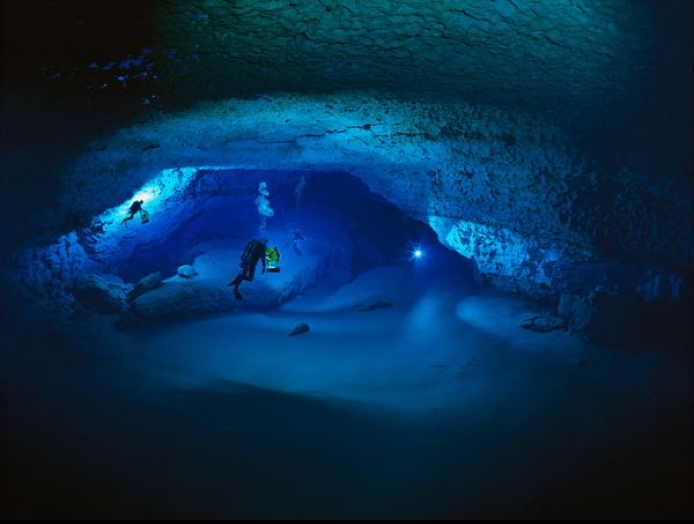 Located 10 minutes southwest from Mt Gambier, in the middle of a farmer’s field, Kilsby’s sinkhole in an unexpected wonder. A hazardous obstacle in previous times, the sinkhole is 20 metres in diameter at the surface, and a long 10m-drop from the surface to the water below.

Famous for its crystal clear water, the sinkhole was first dived in the 1960’s. Dropping to depths in excess of 60 metres, the sinkhole features a number of swimthroughs, limestone walls and other landmarks.

After two tragic deaths in the sinkhole in 1969, the dive site was closed to recreational divers until the 1980’s when the CDAA bought the sinkhole on a lease and began a training facility for cave divers.  A fascinating fact was that between the 60’s and 80’s the Adelaide-based Weapons Research Establishment used the sinkhole for a secret “Barra Sonobuoy” which conducted ‘sub marine detection tests’. There is fantastic access to the sinkhole in modern times, with ramps and ladders leading to the permanent pontoon. This pontoon acts as a perfect area to assemble and conduct training exercises. We warned that the CDAA hold the lease of the sinkhole and all potential divers must read and visit the website to understand laws, times and prices on the day.

Piccaninnie Ponds Conservation Park is located 20 miles south east of Mount Gambier. A stunning due of clear ponds linked from the coastal marshland. From the surface these pools seem uninteresting, yet beneath the waters there is a different story.

While the bottom of the lake is silty and easily stirred up; the sides of the lake are covered in reeds and aquatic weed that support eels and other species of native fresh water fish. Be warned however kicking close to the silt deposits will limit visibility, resulting in a greater chance of becoming disorientated. Perhaps the most unique part of the pool is on the eastern side where there is a huge underwater trench called the Chasm. The Chasm is deep, reaching depths of 35 metres straight down towards a narrow restriction at the bottom called the ‘Cork Screw’. On the west side of the Chasm scuba divers can enter the ‘Cathedral’, a mighty underwater cavern with pure white limestone walls. The entrance is as deep as 24 metres, and the top of the Cathedral is six metres in depth, with the bottom around 35 metres. This is a sunning dive that is totally unique to the surroundings, due to the remoteness of the location though, it is worth booking online to make sure of availability.

Weebubbie cave is shrouded in aboriginal dreamtime, many spoke of how these caves were home of ‘Jeedara’, a water serpent where blowholes are said to be its breath and when angry Jeedara is said to create dust storms.

Between the cities of Perth and Adelaide, close to the border town of Eucla, this is one of 250 cave systems that litter the dust-ridden plains of the west. Millions of years ago the Nullarbor Plain was sea floor and its limestone interior was eroded over time, creating large river systems, caves and other water-based landforms. Not only are some of the caves ginormous, the water that runs through them is also gin clear, filtered by the very same limestone strata. The Weebubbie Cave is almost 100 metres above sea level and a 45-metre rappel to the cave entrance is required. Inside the cave there are two lakes, the smaller of which is 28 metres deep, while the larger cave opens into a large cathedral type dome, and a fascinating side tunnel known as the Railway Tunnel. This is over 40 metres deep and runs as far as 150 metres in length.